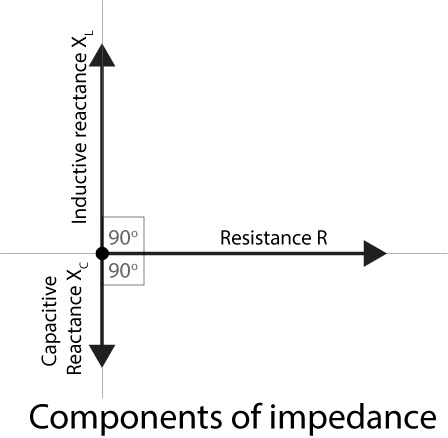 The alternating current (AC) is different from the Directa current (DC) because of its changing behavior. So, the basic elements of a circuit are expected to behave differently in the AC circuit as compared to the DC circuit. The opposition to the alternating current is called impedance rather than resistance. It can be represented with an impedance triangle. We will learn how to calculate the impedance triangle? The AC source provides usually provides sinusoidal voltage to the circuit, i.e. mathematically

Which causes an AC circuit to flow an AC sinusoidal current in the circuit, i.e. mathematically

Before knowing how each element responds to the AC sinusoidal source, let me define the difference in impedance, reactance, and resistance.

Difference Between Impedance, Reactance, and Resistance :

Resistance is the friction experienced by the free electron in every conductor except the superconductor. It is denoted by the capital letter “R” and measured in “Ohms”. The frequency does not affect the resistance.

Reactance is inertia because of the motion of electrons which is present in every current-carrying conductor but most prominent in inductors and capacitors in AC circuits. Reactance has two types; inductive and capacitive reactance. As the name suggests, the inductor-provided opposition is called inductance reactance whereas opposition by the capacitor is called capacitive reactance. Both are denoted by the capital letter “X” with a subscript of “L” for the inductor and “C” for the capacitor. It is also measured in “Ohms”. Reactance changes with a change in frequency.

Any opposition to current an in AC circuit is called impedance, which may be provided by any circuit element like a capacitor, inductor, or resistor. The symbol for that is “Z” and the unit for impedance is “Ohm”. This much broader term than resistance and reactance. Where impedance can be obtained from the combination of resistance and reactance vector addition. Impedance can also be affected by a change in frequency.

How to Calculate impedance Triangle

Using the Pythagoras theorem on the right-angle impedance triangle, we can find the impedance formula which is given below.

Suppose the following circuit with an AC source and a resistor. According to the ohm law, the voltage and current are linearly related, i.e.

Comparing the voltage and current equations (1) and (2b), we observe that both current and voltage have the same frequency and phase. See the following graph for better comprehension.

Putting the equation (2b) into (2a) will give us

Now comparing the equation (2c) with the following equation

Will give us that

The only opposition to the alternating current is the resistance itself.

Looking at the equation (2d) for the impedance of a resistor, we observe that there is no frequency involvement, so the resistance doesn’t change with a change in frequency.

By putting the AC source voltage from equation (1)

Using some calculus knowledge, we can find the above derivative as follow

Observing the voltage and current equations (1) and (3a), implies that the current in a purely capacitive circuit is 90o leading from the source voltage. To understand what the statement means, take a look at the following graph.

X$_{c}$ is the capacitance reactance, the only opposition to AC in a capacitive network.

Observing the equation (3c), we notice that capacitive reactance has an inverse relationship with frequency. By increasing the frequency, the reactance will decrease and vice versa. In a special case of a DC circuit, the capacitor will have infinite impedance, which will cause no current to flow through it. That’s why it is stated that the capacitor is almost open to DC. Whereas for high frequencies the reactance will be too low, that’s why capacitors act short for high-frequency AC.

In a pure inductor AC circuit, the only opposition provided to the current is by the inductor. The current and voltage relation of an inductor is given by the following equation

Where the AC current is given by the equation

In a pure inductor AC circuit, the only opposition provided to the current is inductive reactance. The current and voltage relation is given by the following equation

Where the AC current is given by the following equation

Putting it into the above equation will give us

Which will give us

Inductive reactance X$_{L}$, the only opponent in a pure inductive network for AC current.