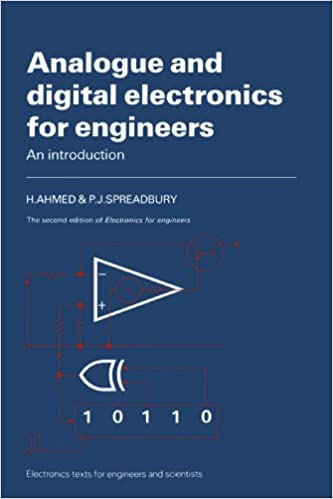 Analog and digital electronics for engineers
AN INTRODUCTION

This second edition of Ahmed and Spreadbury’s excellent textbook Electronics for Engineers provides, like the first edition, an introduction to electronic circuits that covers the early part of degree-level courses in electronics and electrical engineering. The text of the first edition has been extensively revised and supplemented to bring it up to date; two entirely new chapters have been added on the subject of digital electronics.

A first chapter on the general principles of signal handling in electronic circuits is followed by descriptions of amplifiers using field-effect and bipolar transistors and integrated circuit op-amps, written from the point of view of the engineering student building up a system.

Subsequent chapters discuss the principles of applying negative and positive feedback in amplifiers, leading the reader to the final two chapters covering digital circuits and their applications.

All chapters conclude with a solved problem followed by several practice questions from various universities to which answers are given.

This new edition, like the first, will prove a valuable text for first and second-year courses in universities and polytechnics on electronics and electrical engineering and will be useful to practicing engineers and scientists who need to use analog and digital chips in the course of their work.