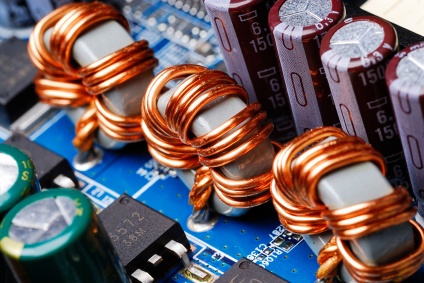 Practically, the inductor has some resistive factor which is very minute and is ignored. It is represented by a series resistor and inductor and is referred to as RL Circuit analysis. Suppose the following RL circuit where a toggle switch can connect and disconnect to the circuit source. The voltage across gradually changes by exponential equations while inductor charging and discharging.

It’s worth mentioning that the current reaches its final value at $5\tau $ as well as the voltage reach that time zero. The graph of current and voltage transients is shown below.

Suppose the above inductor is charged (has stored energy in the magnetic field around it) and has been disconnected from the voltage source. Now connected to the resistive load i.e. the switch is moved to position 2 at the time t=0. The energy stored will be discharged to a resistive load and will be dissipated in the resistor. The current will continue to flow in the same direction and will gradually decrease to zero as well as the voltage across the inductor. But if the inductor is disconnected and not connected to any load, so current will stop abruptly because of no closed path. According to the equations above, it will cause a huge voltage across the inductor and you will observe it in the form of a spark at switch terminals. The same phenomenon is used for car engine ignition.

How inductor charge and discharge through an AC power supply?

How to determine if an inductor is charging or discharging?

The above discussion showed the following key point in detail.