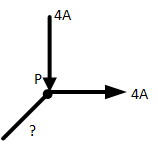 Suppose a node with five components meets, two of them are providing power and the rest three are consuming power as shown in the diagram. According to KCL, the current provided by those two power sources will be exactly equal to the current consumed by these three power dissipating components.

Note the direction of the current in the diagram. The two currents I1 and I2 are entering the node at point P. And three currents are leaving the node.

The KCL holds for DC circuits as well as AC circuits and linear and non-linear components.

Let’s draw the diagram representing the directions of the current.

According to the KCL, the entering current will always be equal to leaving current, i.e.

The unknown current is entering the node :

The unknown current is zero.

Kirchhoff’s Current law assumes that current flows only in conductors, but in the case of high-frequency circuits, current can be caused by parasitic capacitance without any conductor.