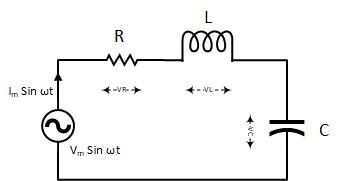 In contrast to RLC parallel circuit, the RLC series circuit contains all the three passive electrical components, Resistor Capacitor, and Inductor in series across an AC source. As there is only one path for current in a series combination, the current in all these components is the same in magnitude and phase.

We know that voltage and current are in phase in a pure resistor while current leads in a purely capacitive circuit and the case of a purely inductive circuit, current lags. So, what about the voltage across each component, if their behavior is so different?

To answer the question, we will first find the impedance of the series RLC circuit.

Before going further, I would like to take the current phasor as a reference. Because the current is the same in all the components of the RLC series circuit. So, it is more robust to compare different quantities to the same current.

In the above impedance triangle, I have assumed inductive reactance is larger and it is making a positive angle with resistance phasor. The total impedance of the RLC circuit is represented with the following formula

According to the Ohms Law in AC circuit, the current of an AC circuit can be found using the following formula

As I have assumed inductive reactance larger than capacitive, so the current, in this case, will lag behind the source voltage.

The voltage across each component in the RLC series circuit :

Applying KVL at the RLC circuit, we will get the following equation

Using the basic current and voltage relationship in resistor, inductor, and capacitor current flow, the above equation can be modified as follow

The above vectors from the above diagram can be added vectorially which will get us to the voltage triangle. The vertical component of the triangle shows the voltage drop across reactance (inductive and capacitive) and the horizontal component shows a drop across the resistance.

Example with the solution:

For the given circuit diagram calculate the RLC series circuit impedance, current, voltage across each component, and power factor. Also draw the phasor diagram of current and voltage, impedance triangle, and voltage triangle.

First of all, let me calculate the total impedance with the following formula

Now the total impedance will be

Where the current is

The voltage across each component in the RLC circuit

Observing the above individual voltages, their scaler summation can get us a larger voltage than the source voltage. Take a look at the following vector diagram.

Where the power factor of the circuit is

As from the above calculation, we have observed that inductive reactance is larger than capacitive, so the power factor is considered lagging.