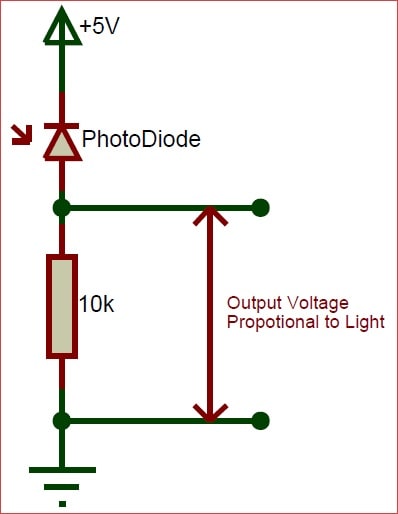 A Photodiode is a semiconductor device that operates in reverse bias. The photodiode has a small opening on the top for light entering the light and energizing the PN junction. They are different from a typical rectifier diode. A typical diode passes current only in forward bias and blocks the current in reverse bias mode. There are types of it like Avalanch, Schottky, PN, and PIN photodiode.

By exposing the diode to the light, electrons from the valence band excite and jump to the conduction band. And thermally electron-hole pairs are generated. As the current carriers increase the reverse current also increases. It causes the photodiodes to operate in reverse bias. The reverse current of the diode strongly depends upon the light hitting the PN Junction through the transparent opening. A dark current is when no light hits the PN junction, a small current is flowing in reverse bias. The dark current is denoted with I­λ.  A careful calculation shows that a photodiode works like a resistor controlled by light intensity.

Speed and sensitivity of photodiodes

The responsivity of the photodiodes can be calculated using the following formula.

η – is the quantum efficiency,

e – is the charge of an electron,

h­v – is the energy of the photon

There are many types of photodiode out there in the market. All of them are working over the same basic principles. Each type has a smaller modification is to improve the quality of the photodiode. The classification of photodiode by functionality and construction.

PN photodiode is the first developed type of photodiode. It is a simple PN Junction diode with a transparent window over the junction. Its sensitivity is not that great not used in advanced applications.

Schottky photodiodes use the small junction area to reduce the capacitance of the junction. It improves the response rate of the photodiode. These diodes are high-frequency photodetectors and are used in optical fiber links.

The commonly used photodetectors are;

Photodiodes are cheap, compact, and easy-to-use devices therefore the most common photodetectors. The range of detection depends upon the materials.

Uses of photodiodes as a photodetector in the following products.