All the industrial and domestic electronic devices are made of a semiconductor. As the name suggests, semiconductor materials are neither good conductor nor good insulator of electrical current like Silicon and Germanium. Because of the very few current carriers (free electrons) available at the conducting shell, the specific resistance of the materials is comparatively higher than conductor and lower than that of an insulator.

Germanium and Silicon are most widely used semiconductors and both belong to the 4 column of the periodic table which means they have 4 electrons in their valence shell. They are having single crystal structure each atom in a structure is connected other four atoms by a covalent bond, which means there will is no free electron in a crystal. But electrons can absorb external energy like light/heat to escape the bond and freely move.

Germanium and Silicon may have some impurities which can cause it loses its property and can conduct more current than expected. These semiconductors can be purified by the use of modern technology which is called Intrinsic Semiconductor. The intrinsic semiconductor has very few free current carriers at room temperature. As the temperature increase, electrons gain energy and become free electron and ultimately resistance of the material decreases which is negative temperature coefficient.

By doping pentavalent element (Antimony), which has 5 electrons in the valence shell, four electrons of the shell make a covalent bond with four Silicon/Germanium atoms. The one electron remains un-bonded which is loosely connected to its parent atom can move freely. The pentavalent element is called a donor. A new type of material is achieved through the process and is called N-Type Material.

It’s worth noting that the number of electrons and proton remain same in the N-Type Material, so, it remains electrically neutral. 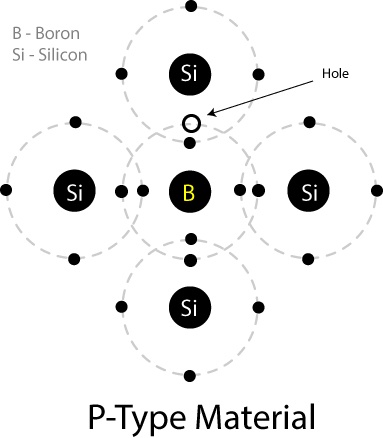 We have been familiar with electron flow but hole flow is something different. A hole is a vacant position where a covalent bond could be formed. If an electron from a covalent bond get energy and escape the bond, the electron can fill the hole and form a new bond here. Thus electron will in one direction and hole move in the opposite direction.

What is semiconductors used for?

The semiconductor devices are used for all electronic devices nowadays, like a diode, transistor, thyristors. Every electrical appliance has these semiconductor devices in it, either if it is Television, Computer, Refrigerator for home and industrial machinery like CNC machines, Telecommunication equipment etc.

1 thought on “What is Intrinsic and Extrinsic SemiConductor: P and N-Type Explained”