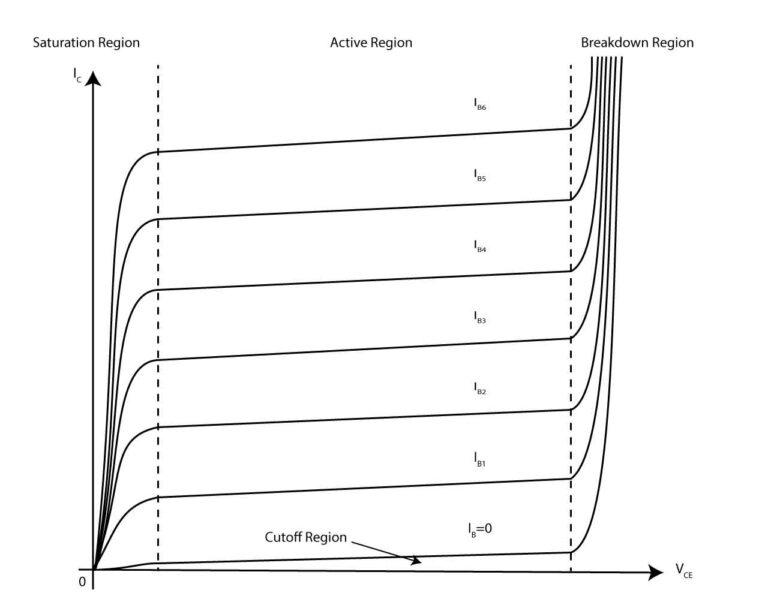 The collector characteristic curve shows the behavior of the transistor. To get these curves we bias a BJT transistor with a variable power supply and change the VBB and V­CC. By variating these voltages, either transistor PN junctions may be forward or reverse biased. Based on the condition of the BJT transistor junction biasing, the transistor can operate in four regions of operation.

Suppose we have an NPN transistor connected with variable power supplies as the diagram shows.

When the base power supply VBB is set to zero, the current IB becomes zero. Both of the PN junctions of the BJT transistor become reverse bias and no collector current IC flows. In this region, the transistor behaves as an open switch. And the VCC voltage appears across the collector-emitter terminals VCE. This region is the cutoff region.

When collector supply VCC is set to zero, and base supply is set to produce a certain base current IB. Both of the PN junctions become forward biased. The base current I­B flows through the emitter terminal because of low impedance and no current flows through collector IC=0. This Transistor region of operation is the saturation region. In this region, both junctions are forward biased. Collector current IC reaches a certain largest current independent of base current IB. In the saturation region, the voltage across collector-emitter terminals VCE is zero.

The active or Linear region

By increasing the V­CC the voltage across collector-emitter terminals V­CE may increase. As the VCE passes the 0.7v, the base-collector PN junction becomes reverse bias. And the base-emitter is forward bias. This mode of operation is the active or linear region of operation in the BJT transistor characteristic curve. By increasing the V­CE beyond 0.7v, the collector current remains constant for a given value of base current IB. Increasing the VCE can cause a very slight increase in IC because of the widening of the base-collector depletion region. The following formula can calculate the active region collector current IC.

By increasing the VCC, the V­CE can be increased which may increase the reverse bias of the base-collector junction. The high reverse bias may cause widening of the base-collector junction and finally break down the junction. As the BJT transistor enters the breakdown region, the collector current will increase rapidly as the curves diagram shows. A transistor is not used in the breakdown region.