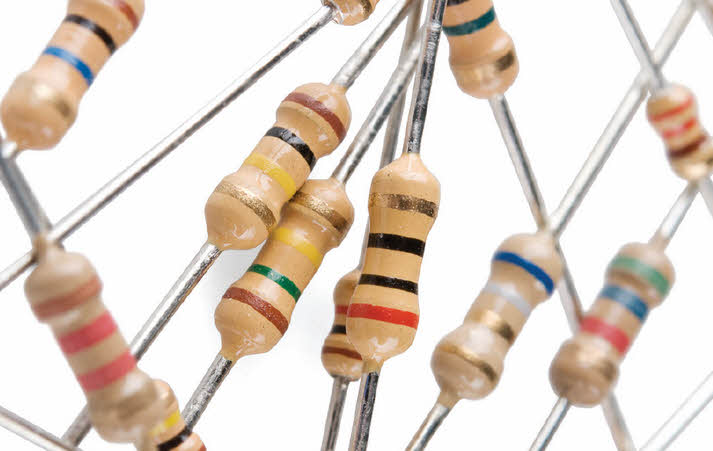 Resistors are composed of highly resistive material to mitigate the flow of current or drop the voltage on purpose. These are passive circuit elements and dissipate electrical energy. During the flow of current, the electron jumps from one atom to another atom, collisions occur and kinetic energy converts to potential energy in the form of heat. Thus the resistors are energy converters from electrical energy to heat. Moreover, there are two types of resistors in electrical engineering; fixed resistors and variable resistors which I will explain later.

Resistance, current, and voltage are very closely related to each other by Ohm’s law. According to the ohm law, current increases as we increase the voltage across the resistor. Alternatively, the statement means that the current and voltage ratio remains constant. This ratio is resistance.

Carbon film resistors are formed by the deposition of carbon material into an insulating substrate. Because of the absence of binding aid, as compared to carbon composition these resistors produce less noise.

Instead of carbon, the metal oxide resistor uses metal oxide deposition onto a ceramic rod. The thickness of the metal oxide film can adjust the resistance value. In some variations, some metals such as nickel alloys can be used instead of metal oxide as an upper layer.

By winding a metal wire i.e. Nichrome around insulators like ceramic, wire wound resistors are produced. The terminals are soldered with metallic caps and then protected with a layer of paints or molded plastic to withstand high temperatures. Because of being a coils, the wire wound resistors are having more inductance but they can be compensated using two coils in reverse directions.

Thin-film resistors are used most widely nowadays with compact size and low tolerance. They are mostly Surface Mount Types of resistors. These resistors are constructed from a ceramic substrate and the deposition of metal oxide onto it. Where the thickness of the film determines the resistance value.

Variable resistors are those whose resistance values can be changed by adjusting some knob. These resistors are used rarely because of moving parts and uncertainty.

A two-terminal fixed tapping device, whose resistance can vary by changing the tap position. ala lowing a smaller or larger part of the resistor can be used.