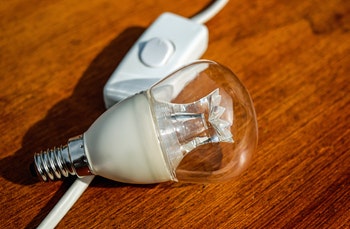 Ohm’s law states that the current flowing in a resistor is directly proportional to the voltage across the resistor. It can be mathematically expressed as

Ohm’s law is one of the basic electrical engineering laws. It provides a relationship between voltage V and current, I, such that current is dependent on voltage.

Ohm’s law is one of the basic electrical engineering laws. It provides a relationship between voltage V and current, I, such that current is dependent on voltage.

The above statement means that if we gradually increase the voltage across a conductor the flow of current will also change with a constant ratio, as the graph presents below.

The above graph and statement can be represented mathematically as follow:

Converting the proportionality into an equation leads to a constant “R”, known as Resistance.

The voltage, current, and resistance formula can be easily obtained from the following chart based on the given and required parameters.

The relationship can be rearranged to determine any element if the other two are given, as the ohm’s laws triangle represents.

Enter any two parameters to calculate the third one in the ohm’s law calculator.

The term Resistance can be defined as: “The amount of opposition provided by a conductor or any other component in the path of current flow, is known as resistance.” If we use units of current and voltage in amperes and volts respectively, then the unit of resistance is called ohm (named after a scientist), which is equal to a volt per ampere and represented by Ω.

Resistance is dependent on the material used for conduction and varies from material to material. Some materials may flow more current than others for the same amount of voltage. The property of materials to oppose electric current is called resistivity, also known as specific resistance.

Ohm’s is not directly applicable to the AC circuits, which involve inductors, capacitors, and/or transmission lines. The law can only be used for pure resistive AC circuits without any alterations. In the RLC AC circuit, the total opposition to the current is impedance Z, which is the combination of two orthogonal elements resistance and reactance.

Ohm’s law is a very basic and important tool in electrical engineering. The above discussion clarifies that current is directly proportional to voltage. Multiple resistors can be combined to get a specific current.