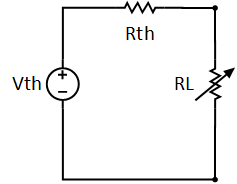 According to the Thevenin Theorem, a complex linear electrical circuit containing several electrical resistance, voltage, and current source can be simplified. The simplified circuit with a fixed resistor called Thevenin equivalent resistance R­­th, in series with a variable load resistor, which varies frequently, R­­­L, and a Thevenin voltage, V­th. In other words, any one-port electrical network can be reduced to a single voltage source and a single resistor circuit. The Theorem holds for any black box linear circuit, doesn’t matter how complex the circuit is.

According to the circuit laws, when a single resistor changes, the whole circuit parameters (voltage and current) change. When a circuit has some variable resistor, it becomes frustrating to calculate over and over. Practically, it happens more often, consider your home outlet where you plug in a fan, iron, and phone charger according to your requirements. In 1883 M. Leon Thevenin provided a handy technique to avoid this problem and save time.

The Thevenin Theorem also holds for AC circuits, where the circuit may contain reactive and resistive impedance load. [1]

Norton Theorem can also reduce a complex circuit to a three elements circuit. But Norton Theorem replaces the source with a current source and Norton Resistor in parallel with the load resistor.

Thevenin theorem is very a very handy tool for simplification of large electrical circuit analysis. A complex original circuit may be replaced by an independent voltage source and two resistors; the first load resistor which changes frequently and Thevenin Resistance, the remaining circuit resistance, both in series. And a voltage source, $V_{th}$, the voltage across the load resistor when the circuit is open, which is called Thevenin Voltage. So, the technique is quite easy, just find the Thevenin resistor and voltage and you are done. I will explain the theorem with the following example.

Suppose, we have the following circuit, with a load resistor that changes frequently that’s why it’s shown as a variable resistor.

To find the Resistance, remove the load resistor, short the independent voltage source, and open current sources. The circuit will look like this:

Now we have to find out the Resistance, R$_{th}$, from the right-hand side (as the arrow points in the diagram).

Now, to find the Voltage, Vth, we remove the load resistance R­L and find the voltage at that terminal.

First, make changes to the circuit and redraw it as follow:

Now in the circuit above, we have to find the Vth, the Thevenin voltage, using any technique we want. Here, I am applying mesh analysis to the circuit, it gives me the following equation:

Notice that I have ignored the 1Ω resistor in finding Vth because no current will through it.

So far we have calculated the Thevenin Resistance and Voltage, we will now plug it into the following circuit. To calculate the current, the supply voltage is divided by the equivalent resistance, keeping Ohm’s law in mind.

Using Voltage Divider Rule, the formula for current $I_{L}$ is:

The Theorem with dependent sources :

It is quite easy to solve a circuit using the Thevenin theorem when it has only an independent source in it. The fact that the output of the dependent source varies with circuit parameters, so they are treated differently. To find Resistance and Voltage (Rth and Vth) in the case of dependent sources, we use two approaches as explained below.

Either the approach assumes some voltage or current at the terminal of the load resistor, R­­L, and will lead to the same results. It often occurs that R­th takes negative values, which implies that the circuit is supplying power.