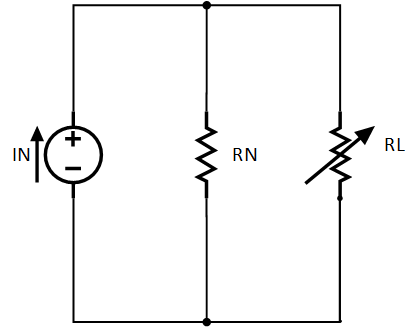 Norton’s theorem says that a linear two-terminal electric circuit may be exchanged with a Norton equivalent circuit. Norton Thoerm circuit consisting of a current source, IN, in parallel with a Norton resistor RN. Where IN is the short-circuit current through the terminals load resistor and RN is equivalent resistance at the terminals when all the independent sources are turned off. In this post, we will learn how to use the Norton theorem with examples.

Just like Thevenin Theorem, Norton Theorem is also useful to analyze a single resistor that changes frequently and the rest of the circuit remains the same. In contrast to Thevenin Theorem, the Norton Theorem reduce it to the single current source instead of the voltage source. An American Engineer E. L. Norton, 1926, proposed that a circuit can be reduced to a single current source, two resistors; RN, parallel with the current source, and the load resistor, R­­L, frequently changing a resistor.

Norton Resistor RN is the same as Thevenin’s resistor Rth and Norton Current IN is V­th/R­­N. So, this implies that Norton Theorem is not more than the source transformation of the Thevenin Theorem.

According to the Norton theorem, any linear circuit can be reduced to a single current source in parallel with RN, which is calculated from the load resistor end keeping all dependent sources.

And the current of the current source can be calculated from the load resistor terminal voltage keeping it open. The generic Norton Equivalent circuit is shown in the diagram below.

Suppose we want to connect some variable resistor at terminal A-B and find Norton’s equivalent circuit to the following example for the terminals.

Solution: How to Use Norton Theorem

First of all, we have to replace all independent voltage sources with the closed- and current sources with an open circuit, as shown in the figure below.

Now we will find equivalent resistance from the terminal A and B point of view, the direction shown by the arrow in the diagram above. So, Norton resistor RN will be:

To find IN, first, we find out the voltage at terminal A-B, while it is open-circuited. So the circuit becomes something like this:

You can use any method you want, here I am using mesh analysis and writing equations as below:

The current I2 is flowing through 5Ω, so the voltage across the resistor will be:

Now we have both resistance RN and voltage V­th, so we can find out the Norton current IN as follow:

The Norton equivalent circuit for terminal A-B will be as follow:

Whereat terminal A-B we can put any resistor we need. We can analyze the resistor current through the current divider rule instead of going into complex circuit calculations.

What type of circuits Thevenin and Norton’s theorem applies to?

Thevenin and Norton’s theorem applies only to the linear circuit. Where the linear circuit is where the circuit parameter i.e. resistance, current, voltage, frequency, and gain doesn’t change with a change in current or voltage.

What is the purpose of Thevenin’s and Norton’s theorems?