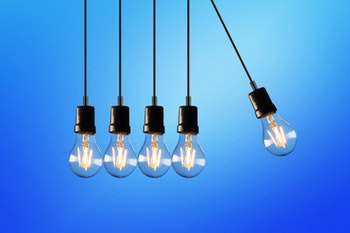 Maximum Power Transfer Theorem state that maximum power will transfer from source to load if and only if the load resistance is equal to the source internal resistance. The theorem was first time presented by Moritz von Jacobi in 1840.

The maximum power transfer theorem is a tool for designing rather than circuit analysis. The theorem is purely about the transfer of power not efficiency. In the early stages, the theorem was misunderstood as the efficiency of the circuit notably by James Prescott Joules. According to the assumption, an electric system can’t be more than 50% efficient. But in the 1880s, Thomas Edison proved the assumption wrong and practically achieved nearly 90% efficiency of an electric circuit.

Suppose the following complex circuit is reduced to Thevenin’s resistor and Thevenin’s voltage source. Where Rth and Vth are fixed and we want to change the load resistor R such that the load gets maximum power dissipation.

I want some numerical elaboration of the above example. I am going to vary the load resistor value from 1 to 8 in eight steps and we would plot the result on a graph. Here is the value of the different values of the load resistor, the corresponding efficiency (on left), and dissipated power (on right).

From the above data and then graph it is easily visible that the load dissipates maximum power i.e. 56.3 watts when the load resistor is the same as an internal resistor (Thévenin’s resistance in this case) i.e. 4 Ohms in this case. In contrast, note another graph, given on the left, that efficiency is continuously improving as we increase the load resistor.

Now we should proceed with the analytical proof of the above claim, as it is the local maxima of the graph if you are familiar with calculus. Suppose the following diagram, where voltage V and internal resistance of source Ri are fixed and load resistance R is variable. We are going to find the load resistance such that maximum power is dissipated in the load. The current flowing in the circuit is:

Power dissipated in the load resistor R, is P$_{L}$, calculate as follow:

To find the maximum power dissipation in load, we have to minimize the denominator term in the above equation, which is a quadratic equation in variable R and contain only one global minima. If you are familiar with calculus, to compute that minima, we have to take the derivative with the respect that variable and put it equal to zero.

We know that practical it is not possible to have a resistor of negative values, so the above equation becomes:

Hence we have proved the load resistor R should be the same as the source internal resistor Ri to have maximum power dissipation in load.

Practically, every load has some non-linearity and contains some components of capacitance and/or inductance, which lead to a reactive component in the circuit. The theorem is also applicable in that case. According to the theorem, maximum power will transfer to the load if and only if the load impedance is a complex conjugate of the internal impedance of the source.

In a radio transmission system, it is the core objective to match the impedance of the radio receiver to the complex conjugate of a transmission line or antenna. So, the receiver set (which acts as load) gets maximum power at a specific frequency.

Suppose we have a fixed source voltage V and the fixed internal impedance of the source as Zi and variable load impedance as ZL. The current flowing through them will be I:

The power only dissipates in resistor only rather than capacitor and inductor, so the power dissipated in load will be:

For power to be maximum, the denominator part of the above equation should be minimum i.e. near zero.

Finally, load impedance Z$_{L}$ should be:

The above discussion has proved that the load impedance ZL should be the conjugate of the source internal Impedance Zi to have maximum power delivered to the load.