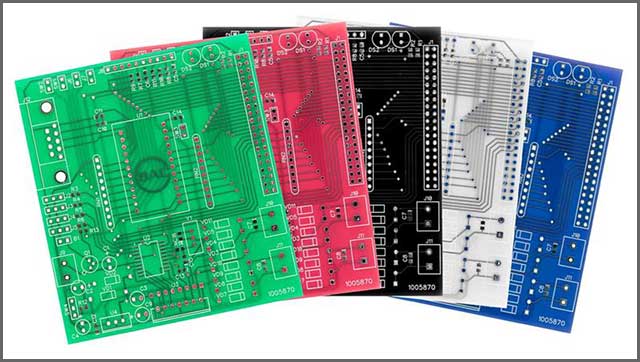 PCB boards are commonly used in every consumer electronics appliance. You may be familiar with PCB’s technical perspective but may be missing some fun facts about PCB boards. Let’s dive in.

Talking about the PCB board, it doesn’t have any wires on it. Even though, it reduces the tedious wiring. The board passes current through the lower copper layer which is called traces. For higher current, the trace size is wide and vice versa. The trace size is adjusted according to the requirement at the time of design.

2. Why PCBs are Green

PBC board is not always green, it has many other variations but green is more common in all the colors. The green color of PCB is a solder mask. The solder mask help against the oxidation of copper traces. It also prevents bridging in closely spaced soldering points. The color of the solder mask doesn’t matter at all, but the green color is most common, and the rare ones are blue, red, black even white. But the purpose is high contrast for identifying the components on the board.

3. What is the etching over the PCB?

Important information about the components is etched on the top of the PCB board. It’s called silkscreen. The silkscreen uses various electronics engineering symbols and terminology for identifying the component. It’s printed with a silkscreen or laser jet printer.

4. PCB is designed inside Computer

PCB boards are designed in computer software called CAD software. The designer first draws a schematics diagram of the desired circuit as per the requirement of the clients. Then they can design the PCB layout out of the schematic diagram for testing. After the successful testing, the PCB design is passed on to the manufacturing plant for fabrication.

5. Every PCB has gold on it

Yes, you have heard it right. Every PCB board has gold on it. Because of the superior conductivity properties of gold as compared to silver and copper. On average PCB has 140 to 700 grams of gold per tonne of PCB. You can extract that gold and utilize it, here is a detailed article on how to extract gold from electronics without chemicals.

6. PCB is getting smaller

As the electronics devices are reducing in size, it applies pressure over the PCB board to reduce in size. The evaluation of PCB size can be better understood by looking at the desktop, laptops, and handheld device sizes.

7. There are Wearable PCB Boards