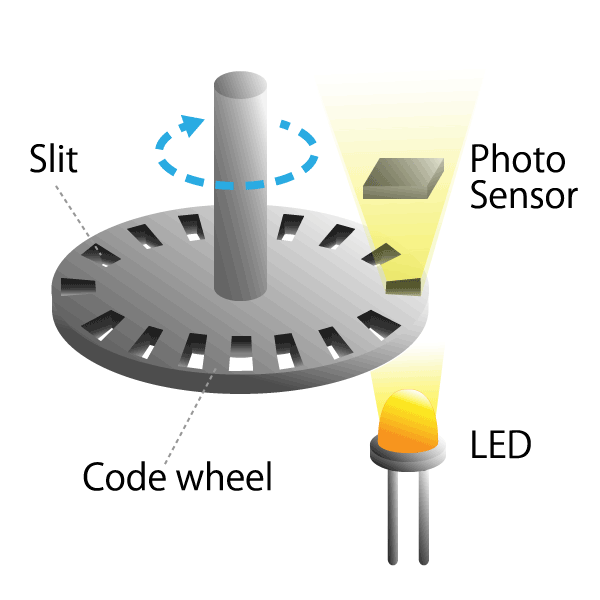 Encoders are angular motion sensors, that can detect angular motion, direction, speed, and angles of the rotation. An encoder can also be used for detecting linear displacement. Encoders are mostly used in industrial processes, robotics, automatic guided machines, stepper, servo motors, etc. The encoder that encodes the angle of rotation is called the rotary encoder and is used for linear displacement is called the linear encoder.

This method uses a variable resistor to measure the rotation. Such encoders are called potentiometers. The change in resistance is detected with a change in current.

A permanent magnet is attached to the shaft and a magnetic sensor is placed near the magnet. When the shaft moves the magnetic field changes and the sensor detects the changes in the field.

The electromagnetic encoder uses induction principles to detect the rotation from inside the motor. The motor consists of a detection coil and an excitation coil. Voltage is induced inside the detection coil using transformer action which helps in detecting the motion.

An ideal encoder can provide the following information about the rotating shaft.

Most of the processes in the latest industries are automatic, non-stop, and redundant. Such a process can be controllable with a computer. These processes could be simple and complex like, PCB board fabrication, hole drilling, component placement, and testing a PCB board. Each motion of the machine in such industries is measured by encoders.

Motors are commonly used actuators with gear assembly to increase or decrease the output torque. A simple 3D printer is also using a motor as an actuator in a linear slide by controlling the motion of the electric motor. The motion of the slide is monitored with encoders.

A servomotor is a closed loop motor. Where the motor is commanded to a certain target angle and speed. With the help of an encoder, it detects if the motor has achieved the target or not. The motor will try unless and until achieve the targeted speed and angle. A servo motor is an assembly of an AC or DC brushless motor, a Servo amplifier or driver, and an encoder.