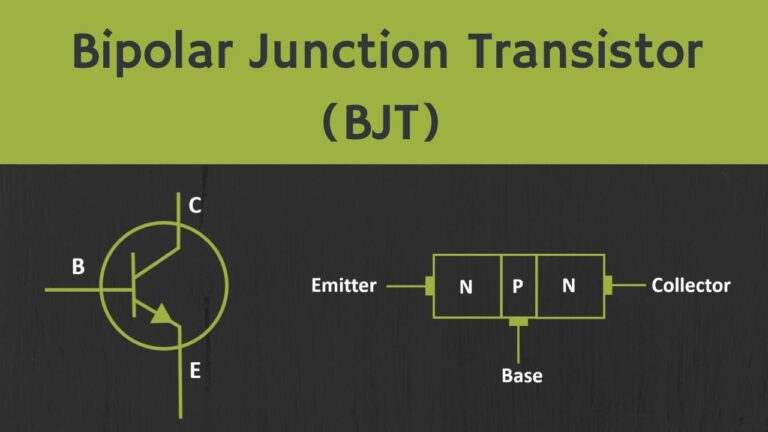 Bipolar Junction Transistor (BJT) is three layers and a three-terminal device having two PN junctions. The bipolar junction BJT transistor is made up of two N-type and P-type materials. In the case of NPN or two P-type and single N-type materials making three two junctions. Transistors are mainly used as switching devices or as an amplifier.

A Bipolar Junction Transistor is a three-layer device where every layer is connected by an electrical. The three-terminal are called Emitter E, Base B, and Collector C. An NPN transistor can be formed by doping a sandwich of P-type between two N-types. Similarly, a PNP transistor is formed by doping a sandwich of N-type between two P-type materials. There are two PN junctions at a transistor. The first junction is a base-emitter BE junction and the second one is called a base-collector BC junction.

In either NPN or PNP, the emitter E is heavily doped, base B is lightly doped and collector C is moderately doped. The outer layers are wide as compared to the central layer. The ratio of the total size of a transistor to the base is 150:1. The doping of the central layer is also less as compared to the outer layers by a 10:1 ratio. Which increases the resistance of the layer by limiting the number of carriers. The transistor is called Bipolar because the transistor current is made up of holes and electron current.

For a properly working transistor, a transistor should be connected to dc voltages at all three terminals such that both of the PN junctions are correctly biased. The base-emitter junction should be forward biased and the base-collector junction should be reversed biased. The working of NPN and PNP transistors is the same except that the role of electrons and holes, biasing voltage polarities, and direction of current flow.

As the BE junction is forward biased and the BC junction is reversed biased so the BE depletion region becomes narrow and the BC depletion region widens. The heavily doped emitter can easily inject electrons (in NPN) to baes and is called emitter current IE. As the base is lightly doped, only a few electrons recombine with holes at the lightly doped base and become base current IB. Where the reset of the electrons cross the BC junction due to the electric field developed by the positive and negative ions. It becomes the collector’s current IC.