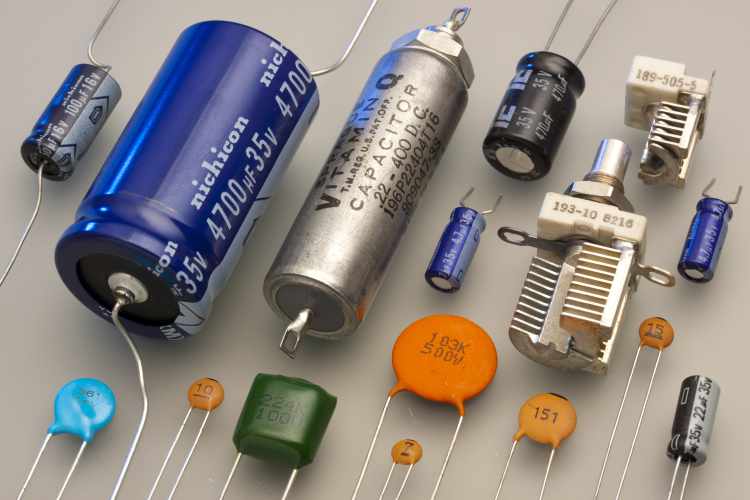 There are multiple types of capacitors available in the market each having different characteristics. The basic functionality of each type is the same but the material type and construction make it different from others. The main thing which mostly causes the differences between capacitors is the dielectric – the non-conducting material between conducting plates.

Commercial capacitors are mostly made of thin conducting plates separated by paraffin-impregnated paper. The combination is rolled up and shaped like a tube. Where small capacitors are made up of ceramic material and dipped in resin for packaging.

Just like resistors, the capacitors are also mainly divided into two categories: Fixed Valued capacitors and Variable Type Capacitors. Each of them is explained below.

The flat mica capacitor contains mica sheets between metal sheets in the form of multiple layers. Those conducting sheets are connected by a wire in a pattern. By using multiple layers, the area of the plate is increased.

The ceramic capacitors are fixed capacitors made up of metallic plates separated by a ceramic sheet. The metal is coated on both surfaces of the ceramic sheet and leads are inserted. Ceramic has a high dielectric constant, so, a small package may give us a high capacitance value. The common metals are copper and silver. These capacitors are used in RF radio applications ranging from pico-farads to microfarads.

Normally three digits are printed over the ceramic capacitor, the first two of them show the digits and the third one shows the number of zeros in pico-farads units. Suppose a capacitor with 154 numbers, the capacitor will have a capacitance of 150,000 pF.

The film capacitor is containing a large family of capacitors and is most commonly available in the market. The film capacitor provides a wide range of values in capacitance. These capacitors are using polystyrene, polycarbonate, metalized paper, polypropylene, or Teflon as their dielectric between the conducting plates.

Monolithic technology is gaining interest in recent years because of being usable in discrete and Integrated Circuits (ICs).

Tantalum Capacitors are of two types: first solid and second wet slug. Pure tantalum powder is pressed in a specific shape and then backed in a vacuum to produce highly porous material. Thing surface of Manganese Oxide (MnO2) is introduced by immersion in an acidic solution. An electrolyte is then added for the contact between the surface area and cathode terminal where the anode terminal is attached to the pure tantalum powder for a solid tantalum capacitor. For wet-slug tantalum capacitors and appropriate wet acids are introduced.

1 thought on “Different Types of Capacitors and Their Construction”